So you're facing the prospect of changing your name, but aren't sure if you have to go through with it. Maybe you're married, divorced, or either event is eminent and this name change question remains an unanswered, looming storm cloud.

Over the years, we've gotten this question many times. Across multiple articles. Of the thousands of queries posted throughout this blog, "do I have to change my name" (or a close variation) remains in the top five.

This is a genuine point of anxiety, doubt, and stress. Dread of penalties, fines, being reported, and worry that they (whoever "they" are) will invalidate your marriage for failing to change your name.

These worries are much ado about nothing. Next you'll see why when we dispel these myths.

If you're resolved to keep your name unchanged, you could always reconsider. Next month, next year, next decade. There's no time limit to change your name. Do nothing, then nothing changes.

Will I get penalized for not changing my name?

There's no civil or criminal penalty for not changing your name. But various DMVs may claim to impose a fine for not changing the name on your driver's license within 30 days or thereabouts.

Whoa, did we just contradict the lead up to this article? No, this occurs when you change your name with the SSA, but not the DMV soon afterward.

In reality, whatever DMV fine may exist is minor to dismissible. There's often zero teeth behind these rules. They're meant to prod people to get off their butts and finish the name changes they've started.

So, there's a penalty, but not really?

We phoned several DMVs to ask what happens if you don't change the name on your driver's license within X-days to match what's on your social security card as directed on their websites.

The most frequent response: nothing happens to you. There's no penalty. No enforcement mechanism to force you to update your name on file. Your license remains valid until it's time to renew.

So why the veiled threat? Why the charade?

Consider this for motivation: If you update the name on your driver's license, there's a reissue fee. Over two million people get married each year in the U.S. Someone's gotta scoop up all that cheddar.

What if my marriage certificate lists my new name?

When you apply for a marriage license, they may ask you to choose a new name after marriage. Are you bound to that choice or can you renege?

In most states, the marriage license application doesn't ask the new name question, but if you're in one that does, it's decision time.

The new name slot on your marriage certificate gives you the choice to change your name, today, tomorrow, or 10 years later. It's nonbinding.

Buy my marriage certificate will only show my new rejected name

Wrong. Your marriage license and certificate will show both your current and new name after marriage.

Nine times out of ten, it's your maiden name. Birth surname for the fellas.

I was told my new name takes effect upon marriage

The marriage license clerk or application might have expressed language to the effect that when you get married your new name choice becomes your new legal name.

Maybe you were told that, but in the real world name change after marriage isn't automatic. It only becomes real once you update ID. We're talking social security card and driver's license.

Think of it this way. You may have a winning lottery ticket, but you ain't a millionaire until you claim and cash it. Do nothing, and it has zero value.

Will someone report my refusal to change my name?

Who's going to tattletale on you for refusing to change your name? And to who? The SSA? IRS? Or another shadowy state or federal entity?

This is conspiracy theory, tin foil hat, going down the rabbit hole level of paranoia. Still, it's our duty to entertain it. For the sake of completion.

Will the SSA find out?

The Social Security Administration (SSA) won't know of your name change, non-name change, marriage, or divorce unless you tell. No city, state, or federal authority will send an auto-alert.

Will the DMV figure it out?

Will the marriage license clerk snitch?

The city or county clerk will record your marriage license after you're married. There's no follow-up. They won't know or care if you've changed your name.

Will my divorce judge force my name change?

Once your divorce judge restores your maiden name or a prior name in your finalized divorce decree, the court won't get involved in your name change pontificating. That will be your cross to bear.

Will I need new certificates issued?

You can't undo history. It's a waste of time. But if you must know…

How do I remove the new name from my marriage certificate?

If you've decided not to change your name, don't bother erasing the new name on your marriage certificate. Leave it alone. It's a historical document. A snapshot in time.

How do I remove the restored name from my divorce decree?

Assuming your divorce judge allowed removal of your restored name order, it's unnecessary. Your divorce is valid either way.

I don't care; I want my new name banished! 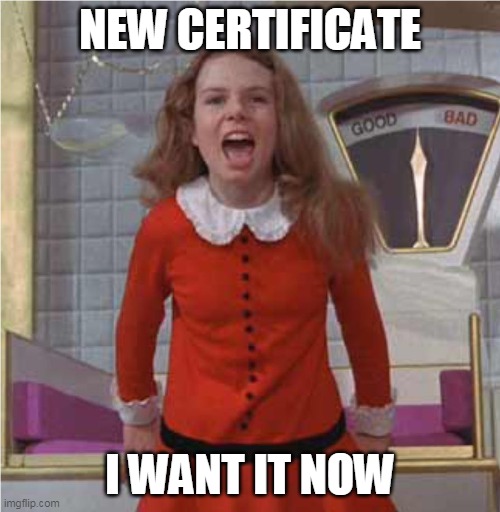 Assuming you got your marriage certificate or divorce decree reissued (unlikely, as they're not mistakes or clerical errors), it'll arrive stapled to your old record. Your indecision will live in infamy.

You are not alone

Here's a sample of actual comments posted on these pages, pondering the wonders of skipping that fussy name change stuff.

So if I want to change it legally, I can but I do not have to and if I do, I can do it at any point during the marriage?

Answer: Yes, you can legally change your name, now, later, or never.

Recently we have to file some immigration document. In the application form, it asks for my new surname after marriage. Can i not fill in the new surname? I supposed I have to declare since it is recorded in my marriage certificate.

I haven't gone through the process of changing my name yet, and am now feeling that I'd rather just keep my maiden name. What are my options? Am I out of luck, or is there a way to fix this?

Answer: Nothing to fix. Take no action and your maiden name stays as your legal name.

If you get divorced and in the divorce decree, it says you will now be known as "xyz" (your maiden name); do you actually have to go through all the hassle of changing your name. Can you choose to just keep the name you have.

Answer: Ignore your divorce decree's new name declaration. It's not the boss of you.

Now I worry that my current marriage is not valid, because I never followed with decree order.

Answer: No worries. You can get remarried using your ex-husband's surname. It's your rightful name too.

Would I get on legal trouble if I don’t change the last name on every document and I have been signing with my last name still.

Answer: You're committing no crime. The name change police aren't coming for you.

On our new marriage license I took his name, but am wondering if I should just continue with my old name on my legal documents like the bank and SS?

Have we slayed the name change Boogie Man?

And, yes, it's spelled Boogie Man, not Bogeyman? This article has sought to dispel myths and common fears surrounding not changing your name. Did we miss a beat? If so, share your questions in the comments section.

Do you plan to change your name?